skip to main | skip to sidebar

That this girl is a cyclist? You better bet your butt I am! That's right, this girl loves her bike!

It's hard to imagine that I absolutely LOVE riding my bike and hitting the trails. Before buying my bike in late February, I hadn't rode a bike since I was... ummmm, let's see..... like EIGHT! Yea, eight years old. Well, I am not gonna just throw my age out there but come on people, that has been a while (LOL)!

In January, I made the decision that I wanted to try riding a bike. It seemed easy enough and well come on, everyone knows the saying: It's like riding a bike! So how hard could it be? Everyone remembers how to ride, oh yea, I can do this... I think, at least I can give it a try.

I began looking at stores and found a few that were a little over 100, being unemployed, I wanted to spend less than that. I checked online and found a bike for $96. SOLD to the lady in red, naturally, that was me and I purchased it. It was great because it was delivered to the store for free and they even assembled it for free.

The day I picked it up, I took one look at the seat and knew, I'd need something else. I grabbed the biggest, softest seat that I could find. Once again the store came to the rescue and put it on for me. I was excited and couldn't wait to get home and try it out.

As soon as I got home, I pull out my bike and hop on.... off I go. Oh man, this is rough, pedaling is hard... okay folk's, the saying is true, you do not forget how to ride a bike but let me be the first to say it was not as easy as 1... 2.... 3 and well, it is nothing like being eight years old again. No wheelies, no hands free, no racing... every bit of my concentration was focused on balancing, not losing control; of course pedaling was pretty important too.

Man that ride was tough, I honestly didn't think I could do it. I pushed myself and I was only able to do half a mile. With my son's encouragement, later that day I did another half mile totalling one mile on my first day. Biking was hard, and I was out of shape.

As much as I wanted to say forget that dang bike, I promised myself, I would try. I joined a group on spark which I need to walk/bike 500 miles in 2010 so that encouraged me to get up and get on that bike again and again... eventually, I was able to do one mile, then two and then three miles strait. I was thrilled when I pushed myself to 5 miles. For several weeks I have been consistently riding 5 miles several days a week. Occasionally I would push myself a little further and make it to 6.5 miles. Talk about being proud!!!

Well, today, I did something even more... I was able to ride 15 miles!!! Yes Fifteen miles and my highest speed today 21.7 MPH. Not only did it feel incredible, it made me realize how strong I am and how anything is possible if you try.

Four months ago, I had to fight with every piece of myself to complete half a mile and today, I accomplished 15 miles. So when I ask, is it possible that little ol' me is a cyclist... Oh yea, I am a cyclist!

For anyone out there thinking about riding a bike, don't be afraid, just try it. Not only does it get you up and moving, it get's you out of the house, there are some great trails just for biking and you can see some amazing scenery while you clear your head and build your muscles. If you think your too big, don't doubt yourself, there is a bike out there waiting for you. And don't forget the gel seat... your booty will love you forever!

Wanted to share a few pics, this is the gorgeous lake I rode today!!! 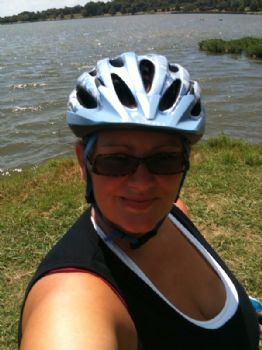 My bike (one day, I will get a nicer bike, but right now, I love this one, especially with my speedometer and odometer) 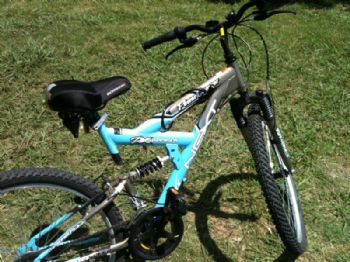 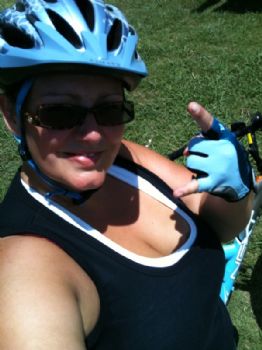 Posted by Overcoming Obesity at 11:52 PM

Overcoming Obesity
I'm 34, 5'3" and weigh in at 330 pounds. I'd love to say I don't know how this happened but I do. As an emotional eater, food is my friend and my worst enemy. I have not always been overweight but somewhere along the way, I found myself turning to food to cope with everyday hustle and bustle, stress, depression or to celebrate happiness. I can no longer hide behind food nor can I stand to watch myself gain another pound. I am very fortunate not to have diabetes, high cholesterol or blood pressure. I realize I am playing Russian Roulette with my health, it's time to break the cycle. Join me over the next 365 days as I work towards changing my relationship with food. I've tried many times and have failed, I hope with my Blog I will become more accountable. I will post things about exercise(or lack there of), food(binges included) and life as I know it. I will do my best not to bore you... my journey will begin on January 1, 2010. Lets enjoy the year together! Cheers to discovering health, mental well being, overcoming obesity and my addiction of food.